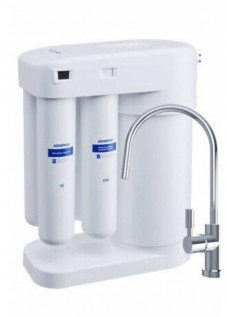 Reverse Osmosis (R.O.) was developed in the 1950s and is considered as one of the major achievements of the water purification industry.

An R.O. must be fed with de-chlorinated, softened and filtered water to best optimize its performance.
R.O. has the ability to remove a very wide spectrum of impurities from water, while consuming minimal energy. With the exception of distillation, R.O. is the only known process which can remove all of the following classifications of impurities: 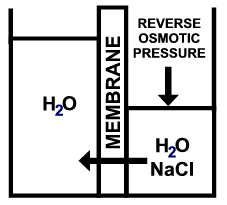 How an R.O. works

To bring an R.O. unit down to its basics, pressure is applied to the raw water via a pump and forces it through a semi permeable membrane. Pure water called permeate passes through the membrane and the impurities will remain on the other side. These impurities are washed to drain using some of the raw water, this is called concentrate. The ratio of permeate to concentrate is usually around 15%. To avoid excessive water wastage a portion of the concentrate is re-circulated back into the raw water feed, also on multi-membrane systems the concentrate of the first membrane becomes the raw water feed for the second and so on. To a commercial R.O. unit, flow and pressure indicators, conductivity probes, Control valves, C.I.P. points and programmable controllers are usually added.

Advantages of R.O. over D.I.